This week’s Sunday Brief focuses on the potential of Citizens Broadband Radio Service
(CBRS) to change the telecommunications landscape.  We will also have an update on
C-Band spectrum auction news.

When we put together a list of Ten Telecom Developments Worth Following in mid-July (available on
request), we were surprised by a broad range of CBRS skepticism in the analyst community, especially
given the breadth of US wireless carriers playing in the CBRS alliance.  “Nice feature” or “science
experiment” was the general reaction.  Many of you chose instead to focus on the C-Band auctions,
which are important and addressed below.

After some reflection, we have come to the conclusion that the most important feature of CBRS is
neither its mid-band position (3.5 GHz), nor the mid-band spectrum gap it fills for Verizon Wireless
(more on that below), but the fact that at times all of the spectrum band can be shared.  Customers
receive the benefits of an LTE band without a costly auction process.

If you are intimately familiar with CBRS, you can skip the next couple of paragraphs.  For those of you
new to TSB or the industry, here’s a copy of the slide we used to describe CBRS in the Ten Telecom
Developments presentation to start your education: 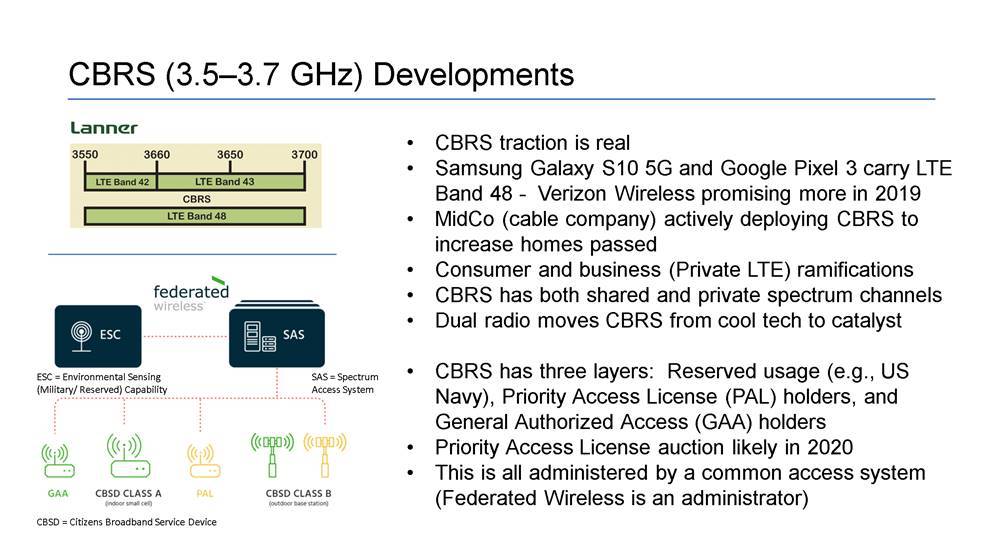 The commercialization of shared LTE bands is pioneering and one of the reasons why it has taken
nearly a decade to move from concept to commercialization (the original NTIA report which
identified the CBRS opportunity is here).  This does not appear to be a singular experiment,
however, as Europe is proceeding with shared spectrum plans of their own in the 2.3-2.4 GHz
frequencies (more on that here).

To enable this sharing mechanism in the United States, a system needed to be developed that
would prioritize existing users (namely legacy on-ship Navy radar systems) yet allow for full use of
the network for General Authorized Access (GAA) users when prioritization was not necessary
(opening up to 150 MHz of total spectrum for GAA which could power 5G speeds for tens of
millions of devices nationwide).  A great primer on how CBRS generally works and how
spectrum sharing is performed is available here from Ruckus, a CommScope company and
one of five Spectrum Access System providers.

It’s important to note that the Environmental Sensing Capability (which determines usage by
priority) and the Spectrum Access System (which authorizes, allocates and manages users) are
two different yet interoperable pieces of the CBRS puzzle.  And, while the ESC providers have
been approved by the NITA (CommScope, Google, and Federated Wireless), the SAS providers
have not been approved (more on that here in this Light Reading article).  While all of the SAS
providers have not been made public, it’s widely assumed that they include the three ESC
providers mentioned above.

Delays in the SAS approval process have not kept the CBRS Alliance from heavily promoting a
commercial service launch on September 18 (news release here).  This event will feature FCC
Commissioner Michael O’Rielly, Adam Koeppe from Verizon, Craig Cowden from Charter, and
others who will celebrate the Alliance achievements to date and place the development as a
central theme going into 2020.

See the article re: CBRS use Cases:  Not Everyone is waiting for private licenses